The best way to describe the state of global energy today is to quote the great American-Canadian writer William Gibson who once said… “the future is already here — it's just not very evenly distributed”. To most in the developed world, energy, or more specifically, electricity, is barely an afterthought. It is like the air we breathe and water we drink. Simply put, electricity… goes without saying. And yet, even as we race forward though the 21st Century, there are large swaths of the planet with no electricity at all. There, people live primitively, and in an altogether different reality.

If pressed for an explanation, one might nod to Gibson’s quote, only to say … “global energy is here – it’s just not very evenly distributed.” It is hard for many to imagine, but powering up a commercial or industrial project located hundreds of miles from civilization, or in a rural agricultural zone, or in a growing community in an emerging market, or in an emergency zone -- is not without its challenges.

Historically, the answer has been to dispatch diesel generators (gensets) of various sizes. But today fossil fuels are volatile commodities, with significant upside price risk, not to mention the concerns with global warming. Also, there is the challenge of delivering fuel to remote locations. With the advent of highly effective renewable energy technologies, the practicality and economics of diesel are becoming less attractive.

Today’s innovations suggest building solar installations in these far flung regions. Afterall, the sun is free, clean and renewable with every new day.
But building traditional fixed solar installations can take a long time to plan, design and build, and they generally need to complete 20-year lifecycles to pay off -- time that many simply don’t have.

Notwithstanding, while fixed solar installations certainly pay off, their upfront costs can run high. In developed markets, these costs are typically mitigated by capital providers like banks and leasing companies offering lease facilities that are hard to come by in emerging markets, often considered too geopolitically unstable for investment.
Regardless of the various pros and cons of diesel and traditional solar, the world faces an estimated power gap of 100 GW by the end of this decade. This is the equivalent of 312.5 million PV panels, or 3X more solar than all solar installed today in the US. Couple this imminent power gap with the demand for global power expected to increase more than 60% by 2040; and you have the perfect storm for mobilizing the world’s largest companies into action.

At the moment, their focus is mostly - although not exclusively - on emerging markets, where renewable energy projects are in demand, and yielding higher returns than in North America and Europe. Their objectives are to identify, integrate and deploy the optimal combination of innovative energy technology and capital to meet growing demand.
Market leaders contributing to the accelerated growth of this sector include Aggreko, Optimal Power Solutions, Engie, ABB, GE, Honeywell, NRG Energy, Siemens, Caterpillar, Outback Power, Husk Power, Powerhive, Larson & Toubro, PowerGen, Juwi, Tesla, EDF, and Schneider Electric. These companies are mostly global system integrators / distributors, each seeking to corner the growing market using various forms of hybridized/renewable energy solutions.

The ideal scenario… renewable energy-based, mobile, modular and redeployable systems for immediate on-demand energy generation. In other words, solutions that offer many of the practical advantages of diesel gensets without the adverse factors related to diesel fuel production, transportation and use, and the continuous dependence on this costly petroleum-derived hydrocarbon.
Consider Swiss-based PWRstation, an up-and-coming solar product developer. It is among the first to approach the limitations of diesel generators and traditional fixed solar with a patented “retractable” solar racking technology that enables it to judiciously pack 480 solar panels into a single maritime container. That’s 163.2 KWp of solar power – delivered on site, plug-and-play ready.

Picture: The Pwrstation INTERMODAL PV SERIES 40’, a 40 'container including 20 PWR Boxes, each containing
4 Racks of 6X 60 cells solar modules.
That can also be calculated as 2.15 KWp per cubic meter, which amounts to more transportable solar energy output per cubic meter than anything on the market.
Order six containers for, say, a mining site in Kazakhstan, a city outside San Juan, Puerto Rico or an oil exploration site 200 miles southeast of Ash Shalfa in Saudi Arabia, and PWRstation will, in effect, be delivering a one megawatt plug-and-play mobile, modular and redeployable microgrid that can be activated in two days. Need to relocate? Fold the retractable solar racking systems back into the containers from whence they came and ship them to the next site. 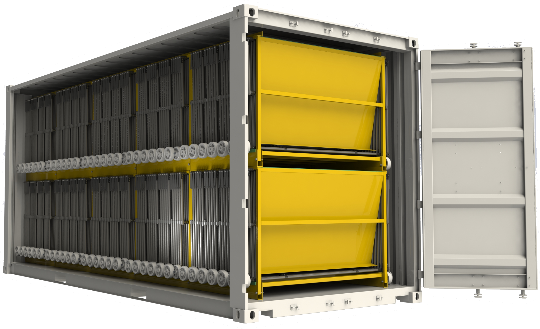 For projects in emerging markets where capital is scarce, PWRstation solutions can be leased, as their mobility – or ability to be repossessed - makes them particularly attractive to third party leasing companies who consider fixed solar too risky.

Is this the future face of energy generation in emerging markets?

Clearly the world of energy is rapidly evolving, and the era of mobile, modular solar energy is here. And with products like those developed by PWRstation and others like them, it is safe to say that the future of renewable energy is here — and it is about to be more evenly distributed.